Showing posts from September, 2019
Show All

A Sliver of Hope 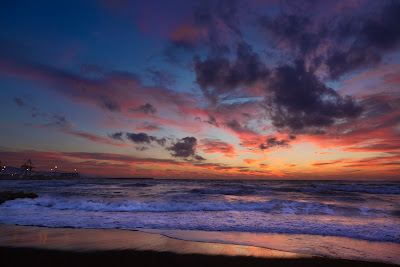 Image Source:  Quino Al We are faced with a landslide of hopelessness and despair. It is difficult to blame people for being afraid to bring children into a world as seemingly broken and cruel as the one we are currently facing. It is easy to be consumed the never-ending spiral of negativity. Without minimizing the severity of the issues that are stacked against us, I would like to argue that we still have a sliver of hope to cling to. For those of us who identify as Christ-followers, we believe that we have a saviour who became one of us, fully human. He suffered as completely and utterly as any human ever could. Not only did he go through excruciating torment on his personal journey to the cross, during his crucifixion he took the sins of the world upon his shoulders and experienced the anguish and pain of the entirety of humanity - even to the point of crying out in the words of the Psalmist, “Eli, Eli, lama sabachthani?” "My God, my God, why have you forsaken me?&quo
Post a Comment
Read more

God's grace is evident in so many areas of our lives. However, some situations seem to be so utterly devastating that we cannot help but ask: where is God and why does God not intervene? The pain and evil evident in the many attacks against women in our country is overwhelmingly traumatic. South Africa is hurting. She is wounded in unison with her daughters who bleed on her streets. She is crying out for deliverance. Why can't our mothers rest assured that their daughters are safe, even at school? Why can't our sisters leave their houses without fear for their lives? Why do men feel entitled to women's sacred bodies? Now is not the time to be silent. Now is not the time to pretend that everything is fine. Now is not the time to presume that the situation is going to fix itself. Now is the time to mourn for our women. Now is the time to remember those who have been brutally murdered. Now is the time to listen and stand in solidarity with those who have s
2 comments
Read more
More posts